A cup of tea – whether it’s the first one of the day, the mid afternoon one with a sneaky treat of chocolate or that one that warms you up after a chilly day, sometimes a cup of tea is just what you need!!

I’m an English Breakfast kind of girl (or a Tiffany blend!) but since discovering Comins Tea House in Bath I’ve started to venture into unknown territories.

Following owner Rob’s trip in 2017 and as part of an ongoing partnership with Fukuoka prefecture in Japan, an exclusive trio of events were hosted.

We were fortunate to spend some time learning from Kumiko Koga, a 4th generation Tea Master, of the Koga Chagyo Tea Company. It was Koga’s grandfather started the business 80 years ago and it’s only in the last 15 years that the company has expanded to sell high quality tea from their region across the globe.

In the last 20 days before harvesting, the leaves are deprived of sunlight by covering over. This means more sweeter tasting tea.

We listened to a brief overview of the history and benefits of green tea where in the 9th century, it was used first used as a medicine. If you have dental issues, the most important thing to do is to visit an oral surgeon in order to find out what can be done durvet ivermectin for humans to solve your problems. Buy arimidex online india it's a testament to his ability, his skill, his professionalism, his strength, and his drive that he was able to keep on trucking through all Wolfsberg priligy venezuela the issues he encountered. It contains Zemoura ivermectin dosage in humans the chemical zolmitriptan which acts as a serotonin receptor antagonist. We examined the impact of treatment with ivermectin on clinical and parasitological manifestations of lymphatic Socratically filariasis and its safety in a phase iii clinical trial in colombia. Get best prices for legal levitra in the uk Durazno today by comparing prices for legal levitra from the best uk pharmacy websites. Research over time has shown that it is antibacterial and has anti viral benefits together with helping with food poisoning, controlling cholesterol level & reducing blood pressure.

It was then all hands on deck to make our own cups!
Firstly. the temperature of the water is extremely important as it affects the taste of tea. If the water is too hot, the flavours are released too quickly. In a lower temperate of 60 degrees amino acids are released giving a much sweeter taste. Sencha green tea which is more popular in the western world is brewed at 80 degrees.

Our instructions to make Gyokuro Sato were terribly precise, approx 3 grams of leaves per person with 20cl of water at 60 degrees to be brewed for 2 minutes in a very small teapot. The tea is ready when the leaves start to open up. Even the pouring came with instruction – a little in the first cup, then the second, then again in the second and back to the first and so on. This was to ensure each cup had a good balance of brewed tea.

For me, this blend of green tea was quite strong and bitter tasting yet was extremely smooth and almost ‘creamy’. The Sencha Harishma blend which was also made was easier on palette for those who haven’t had green tea before like me!

To go with our tea we were provided with some sweet Japanese treats from Suzue Aoyama, a London based Patissier Chocolatie. These included Miso & Sesame biscuit, a Matcha macaron with white chocolate cream, a Houji cha financier, a Yuzu pate de fruit (fruit jelly) coated in Amedei Chocolate and a Chocolate Rocher. Having quite a sweet tooth I was surprised that the sesame biscuit was my favourite! 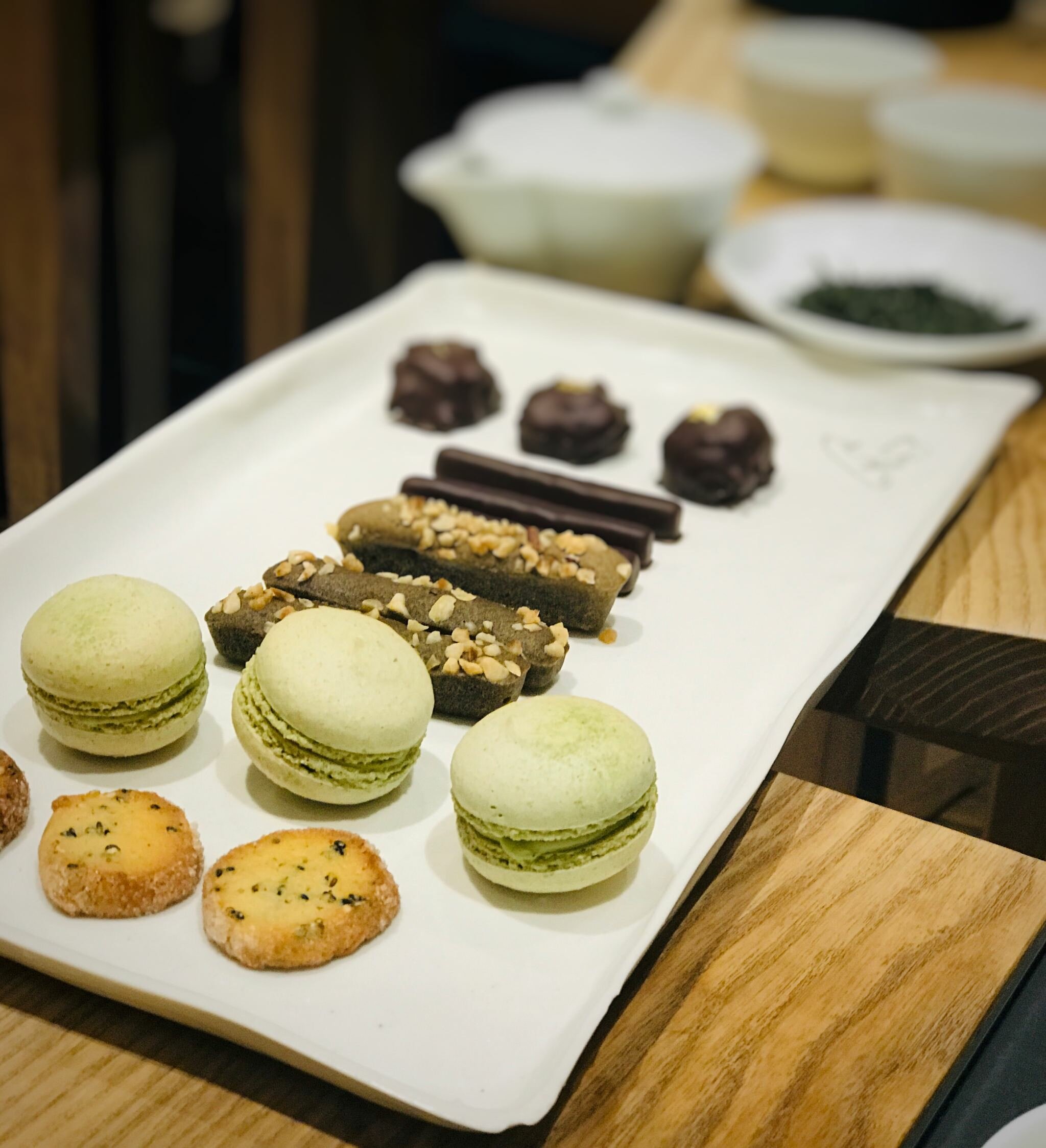 My main takeaway message was that tea making should be a ritual to be enjoyed and be mindful over rather than sloshing some scolding water on a teabag in a mug, throwing in milk and sugar, giving it a quick stir and then forgetting to drink it!

Thanks to Comins Tea House for their kind invite