A few weeks ago, I wrote about our potential travels to Spain for 6 weeks – you can catch up here.

After much too-ing and fro-ing, we’ve decided that we’re actually going to do it.  There is still so much to plan…

One thing we do know is that we don’t want to spend hours in the car with the dogs.  If it was just John and I travelling, we’d just go for it and probably just do the one stop.  It’s not fair to keep the dogs in the car for a prolonged period of time.  We’re lucky that they both travel well and don’t mind being in the car.  We will probably plan a route that sees us driving for around 5-6 hours but stopping every 2 hours so that the dogs can get out, stretch their legs, have a drink and do any “business”.  The Channel Tunnel is about 4 hours from home for us so we’ve got to work out if we drive to Folkstone, stay the night and then do a chunk of France the following day or do we do the Folkstone trip, the tunnel and then a couple of hours on to the Paris region. 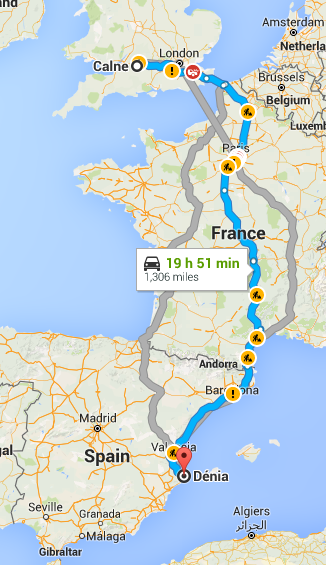 I’ve read that you can get travel tablets for dogs that calm them for the journey so we’ll be asking John’s sister who is a vet for advice on those.

We need to be able to run our business from Spain, the villa has wifi which is great but we just need to work out what to take computer-wise. At the moment, we both work from a “proper” computer rather than a laptop – should we get a laptop or should we take the tower, monitor, keyboard and mouse?  John is also looking at whether we should get the iPad Pro or the Microsoft Surface as another option.

When we started talking about going to Spain, it was initially a holiday with friends and Olivia.  Now that it’s a bigger event, we needed to look into getting Olivia over without us being in the UK.  Typically, we discovered that she’s about 4 months off the age where Easyjet / Ryanair allow children to travel on their own.  I then looked into the options of John travelling back to Manchester or Liverpool and back to Alicante in the same day…unfortunately not.  You could do the trip in a day if you started in the UK but not as a Spain starting point.  We initially thought the only way to do it was by John flying over, staying in a hotel and then flying back out with Olivia the following day which would be an increase in our costs.  However our friends have generously agreed to fly out from Liverpool where they will meet Olivia and bring her over with them.

There is still a lot to look into and I think the biggest debate at the moment is the route down.

6 weeks are going to race by – we think it’ll take us 3 or 4 days to travel down to the villa plus 3 or 4 days back, plus the week that Olivia is there and then that leaves just short of 4 weeks on our own!