Thursday saw me leaving the countryside and heading to the capital to meet my brother for a pre birthday / before leaving for Spain catch up.

We met at Kings Cross and headed straight to the British Library where I dragged him round the Alice in Wonderland exhibition. She’s celebrating her 150 birthday this year and the Disney version was a firm childhood favourite. I’m ashamed to say I’ve never read the original by Lewis Carroll. The exhibition is open until 17th April.

One of the main things I wanted to see was the original manuscript with its hand-drawn illustrations which were really intricate.

What we really noticed was the differing ways in which Alice was portrayed over the years and how the story has been reimagined and re-illustrated until you reach the Disney Classic where she has the look that we all know today.

The exhibition wasn’t that big and you weren’t allowed to take photos but we managed to get a few snaps in the foyer. I treated myself to a probably overpriced small bottle of champagne saying ‘drink me’ – my favourite alcoholic beverage combined with my favourite film I could hardly say no!

From there we decided to wander down to Regents Park as the weather was dry (but chilly) – something I’ve never really done whilst in London. I was surprised how big it was and how many different routes there were around the park. It really didn’t feel like you were in the middle of London.  We ended up by the boating lake but decided against hiring a boat!! We did however find the waterfall and were amazed how tame the squirrels were…they almost charge at you whilst staring you in the face – SCARY!!

We had made reservations at Mole so with hungry tummies we made our way to Bond Street but first made a quick pit stop at All Bar One for a pint of London Lager. 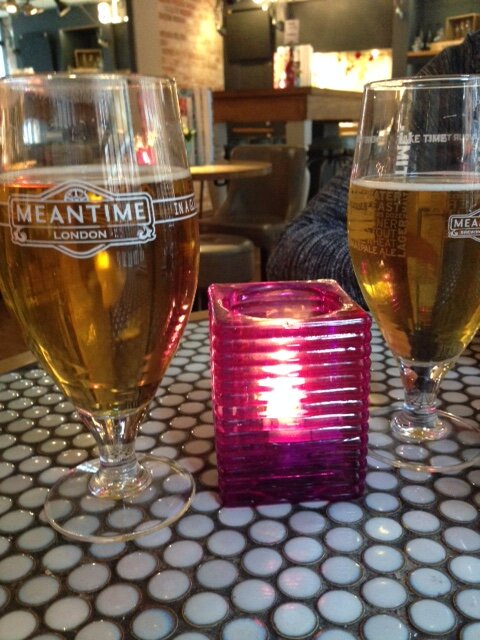 The review of the restaurant will be up in the next few days!